More Green on the Wall!

More Green on the Wall!

Last time we talked about “Going Vertical” with plants and in particular the TerraScreen™ living wall system.

That’s just one of several living wall systems that are available from FosterPlants™ though, so let’s talk about a few others. Each is more suited to certain applications. Some use soil as the planting medium and some use a foam plantingpad. 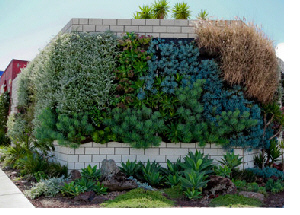 The Wally™ is a very reasonably priced modular system that’s as well suited to the do-it-yourselfer as it is to the Professional Interior Plantscaper. The Wally is a breathable felt pocket — as its name suggests — and it’s made from 100% recycled plastic bottles. How green is that! Wally’s are available in a few different colors and three different widths. Wally One, Wally Three and Wally Five. They’re also available in two models, one for indoor use and one for outdoor.

One of the major benefits that we see in the Wally™ is its ability to conform to curved walls. Something that not every living wall system is capable of!

We’ll soon be experimenting ourselves with the Wally and will post some photo’s of our own Wally wall as soon as they’re available.

We’ll also soon have Woolly Pocket™ products available to the Do-It-Yourselfer for purchase on our AwesomePlanters.com website.

Next, let’s talk about the greenwalls™ Modular Planting System from McCaren Designs.

The greenwalls™ system was developed by McRae Anderson of McCaren Designs in Minneapolis, MN. and it”s a modular system that is just over two inches thick. The modules are available only To-The -Trade and are offered in 36″ squares which comprise a foam planting material encased in a metal grid. The modules also feature their own waterproof membrane and once professionally installed, the supporting wall is completely protected from moisture. 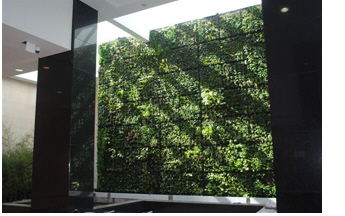 The VGM modules are 19.6″ wide by 22″ high and they are available in two depths — 6″ and 10″ — selected based upon the needs of the plants that will be installed. VGM units are constructed from 100% recycled polypropylene plastic and ship flat to save shipping and fuel costs. How green is that! 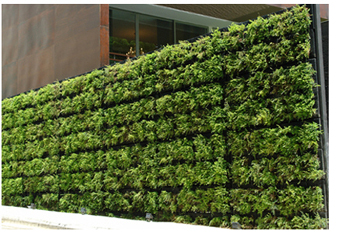 Once received at our facility, the modules are assembled, a soil retention bag which comes with each module is then inserted and filled with a 95% inorganic soil mix. Slits are then cut in the soil retention bags and the plants are planted into the modules and grown in with the modules laying flat on their backs. Once grown in, in about a month or so, the modules are ready to be mounted onto the vertical surface where they will reside. Shown above is a Tournesol™ VGM Living Wall installed and thriving.

The images in this post are courtesy of Woolly Pocket™ Garden Company, Greenery Office Interiors & Tournesol Siteworks™ and do not depict living walls that FosterPlants™ has installed. Wouldn’t you like to be our first?

About the Author: Steve